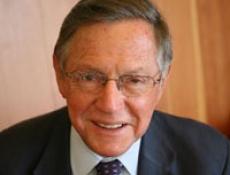 Roger Hale was the 2nd Chair of the Ploughshares Fund Board of Directors, serving from 2005 until 2013. Prior to his chairmanship, he had been a member of Ploughshares Fund's Board of Directors since 1995. A native of Minnesota, Hale was president and CEO of Tennant, an industry-leading manufacturer of industrial and commercial floor maintenance equipment, from 1976 to 1998 and was a director of five NYSE companies during his career. He retired in 1999. Hale has served on the boards of the Walker Art Center and Public Radio International. He is a graduate of Brown University and Harvard Business School, and served as an officer in the U.S. Navy from 1956-1959.