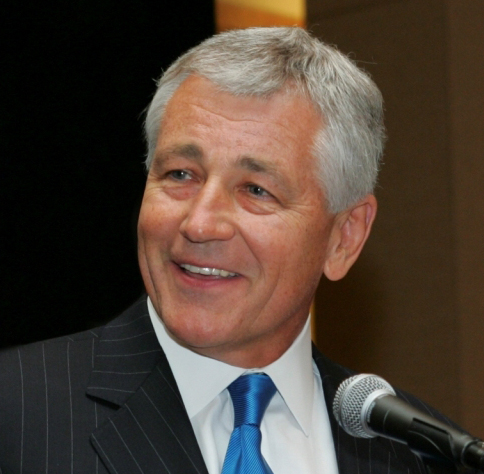 Washington, DC – Ploughshares Fund congratulates Senator Chuck Hagel on his nomination by President Barack Obama for secretary of defense. His strong record of leadership on national security will make him a valuable asset for the Department of Defense during this period of strategic challenge and transition.

“We have been grateful for Sen. Hagel's work on the Ploughshares Fund Board of Directors since he joined us in 2009,” said Ploughshares Fund Board Chairman Roger Hale, a prominent Minneapolis business leader. “We value his leadership on smart, bipartisan solutions to reduce the threat of nuclear weapons, and applaud the President’s choice. Sen. Hagel’s commitment to reducing nuclear dangers - both in the Senate and in the years since - sets him apart as one of America’s most insightful and effective voices on nuclear security. We wish him a speedy confirmation.”

“Sen. Hagel epitomizes the growing bipartisan consensus for a new nuclear security strategy – one that will meet the challenges of the 21st century and make Americans safer and more secure,” said Hale. “He is an excellent choice to lead the Department of Defense.”

Ploughshares Fund gives individuals the means to make an immediate impact toward a world without nuclear weapons. Since 1981, Ploughshares Fund has led and supported a community of experts, advocates and analysts to implement smart strategies to reduce and ultimately eliminate nuclear weapons. In 2010, Ploughshares Fund spearheaded the successful campaign of over 50 non-governmental organizations to win the Senate approval of the New START treaty. The group is currently concentrating on efforts to bring the nuclear weapons budget in line with the needs of our 21st century military; to continue U.S. and Russian nuclear weapons reductions in a way that benefits both nations’ national security objectives; and to promote diplomatic resolution of Iran’s nuclear program.

Ploughshares Fund is a publicly supported foundation that funds, organizes and innovates projects to realize a world free from the threat of nuclear weapons. For more information, please visit www.ploughshares.org.