The escalating cost of maintaining US nuclear weapons

Ploughshares Fund grantees Tri-Valley CAREs, which advocates an end to new nuclear weapons development activities at Lawrence Livermore National Lab, and Hans Kristensen of the Federation Of American Scientists have teamed up to examine the Department of Energy’s past, current and projected spending on nuclear weapons activities.

What they found would surprise most people in the US: The DOE’s spending on nuclear weapons activities continues to rise – even while the number of warheads has gone down. As the graph illustrates, while the stockpile has decreased by half since 2000 the budget to maintain it has doubled. 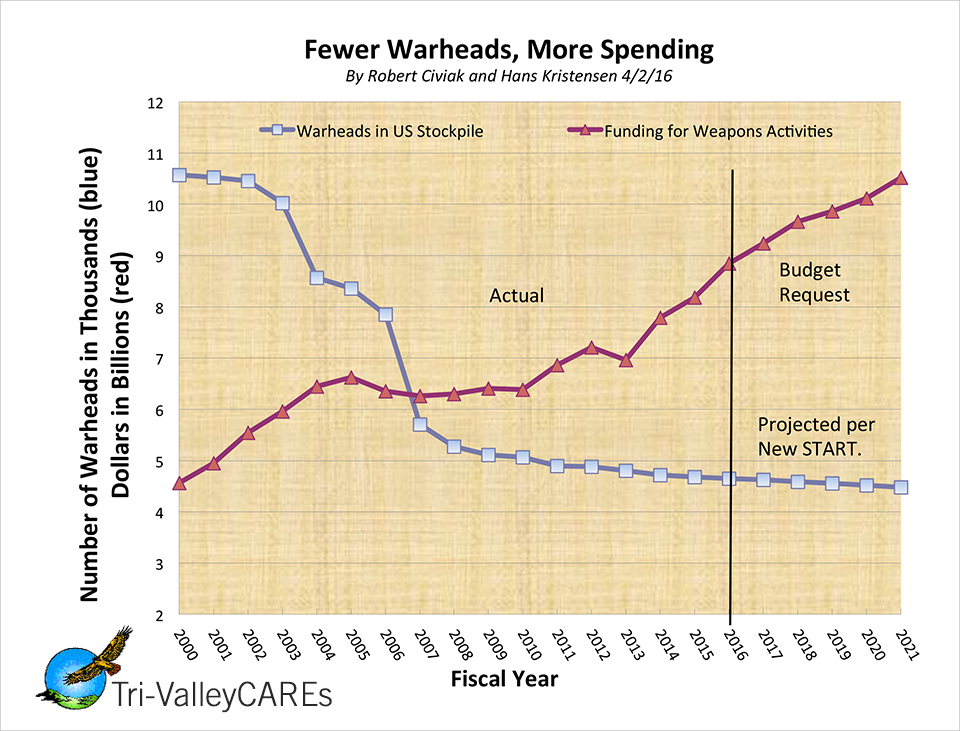 By Robert Civiak and Hans Kristensen 4/2/16

According to Tri-Valley CAREs’ Marylia Kelley, "the escalating cost of maintaining US nuclear weapons is due not to the difficulty of the task or to excessive 'aging.' Rather, it is caused by increasingly exotic elective changes that the Department of Energy (DOE) National Nuclear Security Administration (NNSA) is introducing into the stockpile through its Life Extension Programs (LEPs)."

A real world example of LEP spending run amok is the B61-12, the newest iteration of the decades-old B61 design. In 2013 we wrote about it costing more than twice its weight in solid gold. It began as part of an LEP and is possibly the most expensive bomb ever built. As Hans Kristensen from the Federation of American Scientists explains, "the capability of the new B61-12 nuclear bomb seems to continue to expand, from a simple life-extension of an existing bomb, to the first US guided nuclear gravity bomb, to a nuclear earth-penetrator with increased accuracy."

The White House pledged not to pursue new military capabilities: “The United States will not develop new nuclear warheads or pursue new military mission or new capabilities for nuclear weapons.” Its own Nuclear Posture Review from 2010 says the US is "reducing the role of US nuclear weapons in US national security strategy". The chart represents a contradiction to these ideas, raising the question: When will our government put its money where its mouth is?

We are very grateful to Tri-Valley CAREs and other grantees who highlight the costs of nuclear spending plans. This is an important component of a larger investment strategy through which Ploughshares and its grantees seek to create a world where nuclear weapons can never be used again.