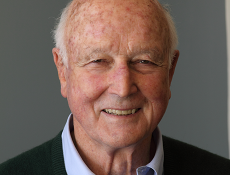 Lewis Hanchett "Lew" Butler is the founding Chair of the Ploughshares Fund Board of Directors. Serving as Chair from 1981 until 2005, Lew was part of the historic meeting in Sally Lilienthal’s San Francisco living room that established the idea of Ploughshares Fund. He has dedicated his life to public service across a broad array of fields, including public health, environmental conservation, civic engagement, and the elimination of nuclear weapons.
Lew was one of the first overseas staff members in the Peace Corps, serving as Peace Corps Director in Malaysia from 1962 to 1964. He later served as assistant Secretary for Planning and Evaluation, in the Department of Health, Education and Welfare under the administration of President Richard Nixon. In 1971, Lew became one of the first officials to resign from the Nixon administration in objection to the Vietnam War and President Nixon's bombing of Cambodia. During his years of public service Lew recreated California Tomorrow in 1984 to deal with California's future as a multiracial, multilingual and multicultural society where the white population would no longer be a majority, focusing on the education of immigrant children.  Later he created the Butler Koshland Fellowships to identify and mentor the next generation of public service leaders, and he helped ensure the successful conversion of the Presidio of San Francisco from an army base to a vital National Park.
Lew continues to work toward the eventual elimination of nuclear weapons, recently contributing $1 million to the Ploughshares Fund endowment. Upon his retirement as Chair, Lew was honored with the establishment of the Lew Butler Fund for Innovation, a special fund within the Ploughshares Fund endowment that generates income for the support of new ideas and initiatives for building a safer, more secure world for future generations. His vision and commitment to making his community, his country and the world a better place continues to inspire our work today.