5 Fun Finds in the Ploughshares Office 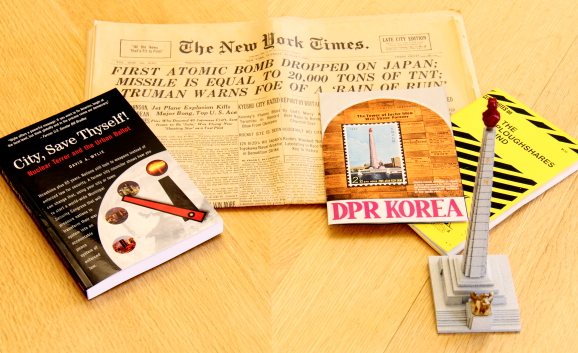 As we all wished a very happy birthday to the United States of America this week, at Ploughshares we were also busy with some spring – make that summer – cleaning. Books made their way onto new shelves, and pamphlets into files. Along the way we found some blasts-from-the-past and other items that left us scratching our heads:

• “City, Save Thyself!” This book by Davis A. Wylie is on this list less for its subject matter than for its attention-grabbing title. It’s not likely to go unnoticed on the bookshelf. Despite its apocalyptic name, the book focuses not on the nuclear demise of cities, but rather on the role that local leadership can play in nuclear security.

• North Korean Stamp Catalogue. With stamps memorializing the North Korean “Arch of Triumph” (reminiscent of the French monument of the same name), and promoting a “north-south Confederation under a single national nomenclature,” this pamphlet is full of images of candy-colored stamps and phrases such as “Juche Korea prospering under the wise leadership of the Party centre.” Turns out Program Director Paul Carroll brought this packet back from a trip to North Korea several years ago.

• Ploughshares Cliffs Notes. If you are in need of some last minute cramming on the Ploughshares Fund, here’s your solution! This handy booklet has been in the office for over a decade… And no one can figure out quite where it came from! With the classic yellow and black cover, it would fit in nicely on a college student’s shelf.

• Newspaper from 1945. On Tuesday, August 7, 1945, the headline of the New York Times read, “First Atomic Bomb Dropped on Japan; Missile is Equal to 20,000 Tons of TNT; Truman Warns Foe of a ‘Rain of Ruin.’” With World War II about to come to a close, the front page was dominated by war news, with a very heavy focus on the atomic bomb. One story on Hiroshima was titled, “New Age Ushered.” Inside the paper, Secretary of War Henry L. Stimson was quoted: “The military weapon which has been forged from the products of this vast undertaking has an explosive force such as to stagger the imagination.” Stimson would devote his last years in office – and indeed, the last years of his life – to controlling nuclear weapons.

• Model of the Juche Tower. Another North Korean oddity. Made to celebrate Kim il-Sung’s 70th birthday, the Juche Tower (or, officially, the Tower of the Juche Idea) is a monument in Pyongyang. The “Juche Idea,” Kim il-Sung’s political thesis, has been elaborated into a collection of ideas that the North Korean government uses as justification for its actions. Though the real tower is 560 feet tall, the model that we found in the office is less than a foot high.

• Binoculars. Not the first thing you’d expect to find in the Ploughshares office. But with a lovely spot in the Presidio, we are in prime bird-watching territory.

Expert: If You Want North Korea to Give Up Nuclear Weapons, Start by Ending the Korean War