Reflections of a US nuclear arsenal commander 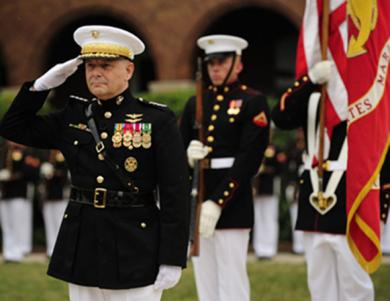 Retired Marine General James E. Cartwright, who from 2004-2007 oversaw the US nuclear arsenal as commander of USSTRATCOM, believes that there are three existential threats humanity faces today:  a major asteroid strike, a worldwide pandemic, and nuclear weapons.

Seventy years ago today, on August 6, 1945 the world witnessed the devastation that just one nuclear weapon can cause, when the United States dropped the atomic bomb, the first nuclear weapon ever used in warfare, on the city of Hiroshima, Japan. Three days later, a second bomb was dropped on Nagasaki. The two bombs killed more than 100,000 people instantly, and caused untold damage in the aftermath—both physical and emotional. Another 150,000 men, women and children lost their lives from injuries and other health problems sustained as a result of the bombs.

Thousands of people gather at Peace Memorial Park in Hiroshima – ground zero of the 1945 atomic bomb explosion – every August 6 to reflect upon the devastation and to honor those who lost their lives. General Cartwright, who also served as the Vice Chair of the Joint Chiefs of Staff from 2007-2011, was stationed in Japan several times and had the opportunity to visit Peace Memorial Park on more than one occasion. Japanese schoolchildren visit Hiroshima Peace Memorial Park as a part of their studies and are assigned to collect other visitors’ impressions and thoughts. On more than one occasion, these children have approached General Cartwright to ask him to write in their notebooks.

“I found the activity interesting, particularly from the perspective that it had become a part of their heritage, it was not a source of poor relations between the two countries,” Cartwright told Ploughshares Fund.  “As soon as you signed the book the conversation turned to music, clothes, movies, etc.  They had found a way to strike a balance between a very dark day in our history, juxtaposed with their total fascination with our culture.” 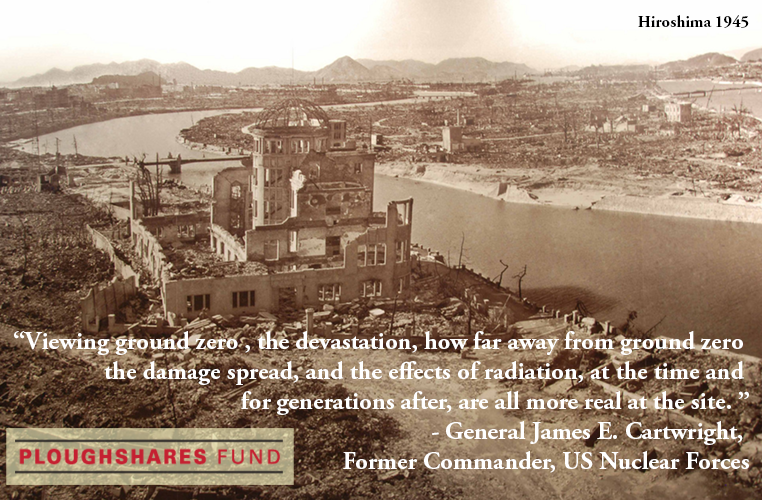 We can’t all visit Hiroshima and experience firsthand the devastation that occurred in 1945. But we can listen to one man who has. The same man who was in charge of the safety of our nuclear arsenal, and in turn the safety of our country. When that man calls for drastic reductions to nuclear weapons worldwide and smarter safety measures to prevent theft or detonation by miscalculation or malice, we should all listen.

Today, nuclear weapons remain one of our greatest liabilities; there are nine established nuclear states with a total global stockpile nearly 16,000 strong.  Maintaining these dangerous weapons of mass destruction on hair trigger alert leaves us vulnerable to cyberattacks and a variety of mishaps. 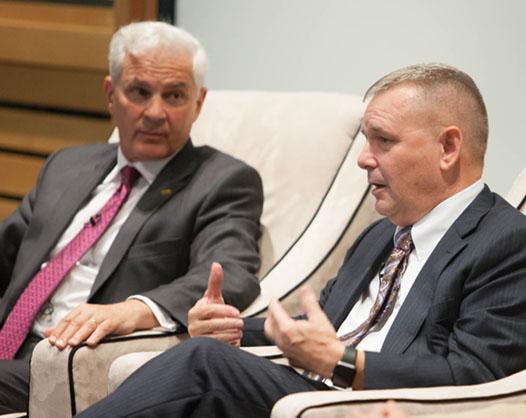 Beyond the unimaginable scale of the immediate loss of life, a nuclear exchange anywhere in the world with the caliber of nuclear weapons we have today – which are 100 times more powerful than those that the US dropped on Hiroshima and Nagasaki – would be catastrophic on the climate, global food supplies and human health.

The devastation of Hiroshima and Nagasaki should serve as a somber lesson, reminding us all of the destructive power of nuclear weapons. General Cartwright’s own experiences in Japan had a profound impact on him.

“I have been taken by Hiroshima Day in Japan,” Cartwright added. “From my early tours of duty to more current experiences when Japanese and US citizens mingled in quiet reflection, tolerant of each other’s presence.”

Understanding, reflection, tolerance—these are things we all need in order to move forward, together, toward a world where nuclear weapons will never be used again.

The US War Department's Archival Footage of the Bombing of Hiroshima