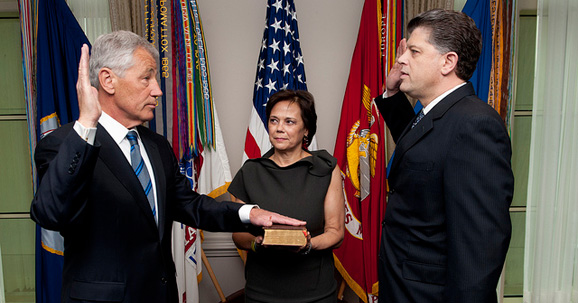 Secretary of State John Kerry was a nuclear security champion during the battle for New START. He is a master of nuclear policy details, understands the intricacies of diplomacy with Iran and, as a founder and board member of Ploughshares Fund grantee the American Security Project, appreciates the vital role of non-governmental organizations in the policy worlds.

Secretary of Defense Chuck Hagel (a former Ploughshares Fund board member) co-authored with then-Senator Obama sweeping nonproliferation legislation in the Senate. He was a member of our grantee Global Zero and favors common-sense proposals for reshaping nuclear forces. For the past two years, he led an Atlantic Council Task Force on Iran, funded by Ploughshares Fund.

The President enjoys a deep bench that includes Chief of Staff Denis McDonough, the first foreign policy expert ever to fill that post. I worked closely with Denis at the Center for American Security and know that he is fully behind the president’s efforts to transform U.S. nuclear policy. This team also boasts Deputy National Security Advisor Ben Rhodes who was a chief author of the president’s 2009 Prague speech on transforming nuclear policy. National Security Advisor Tom Donilon, who, though not particularly outspoken on nuclear policy, joined 35 other national security leaders (including Madeleine Albright, Sandy Berger, Bill Perry, Tom Daschle and almost a dozen experts now serving in the Obama administration) in a 2007 policy report (pdf) recommending shifting nuclear policy to focus on the threats of nuclear terrorism and new states and trimming the U.S. arsenal to 1,000 deployed nuclear weapons. I am honored to be one of the experts who co-authored that report.

Experts will be looking to see if Obama re-nominates Rose Gottemoeller to become Undersecretary of State of Arms Control and International Security. She negotiated the New START treaty and is ideally suited to working out arrangements with the Russians. At press time, it appears that the president will nominate Ernie Moniz as secretary of energy. He is an expert on the nuclear weapons complex and could reshape this bloated bureaucracy.

If the president intends to restart his effort to transform our nuclear policy, he could not have picked a better, more unified team to do it.