A Big Deal for Nuclear Security 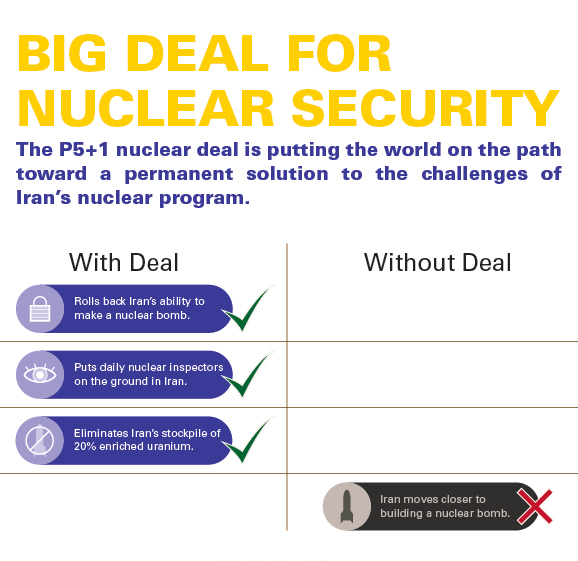 The recent first-step nuclear deal with Iran will strengthen U.S. security by verifiably halting Iran’s program and setting a path for rolling it back through comprehensive nuclear negotiations.  So why are some in Congress opposing the deal, and what outcome do they expect if they scuttle diplomacy?

It’s important to remember what the U.S. gets with this deal, versus the alternative.

[the deal] achieves what prior negotiations failed to do: preventing Iran from talking while it continued to build up its stockpile of enriched uranium. And it gives the United States transparency into Iran’s nuclear program that it has never had before—regular, often daily, inspections of key installations.

If the deal were to fall through – or be undermined by new congressional sanctions – U.S. security would be greatly harmed.

If these negotiations were to collapse -- and collapsing the negotiations is the goal of some of the most hawkish hawks -- the most plausible alternative left to stop Iran would be a preventative military strike, either by the U.S. or by Israel…Such a strike might end in disaster.

That’s why leaders like Sen. Dianne Feinstein (D-CA) are raising their voices to explain why the first-step agreement is a big deal for American security. As she said on the Senate floor yesterday:

The interim agreement with Iran is strong, it is tough, and it is realistic. It represents the first significant opportunity to change a three-decade course in Iran and an opening to improve one of our most poisonous bilateral relationships. It could open the door to a new future which not only considers Israel’s national security, but protects our own.

This agreement is an historic concrete step that may help solve one of the world’s most pressing nuclear challenges. And we can get there without firing a shot. After more than a decade of war, it’s an opportunity worth seizing. That’s a big deal.