a profile of Gael Tarleton, Ploughshares Fund Board Member

Gael Tarleton is a Ploughshares Fund board member who also represents the 36th district of the Washington State legislature, a seahorse-shaped swath of Seattle nearly entirely surrounded by water that embodies the maritime spirit of the city’s past and future. The 36th ranges south from the Ballard neighborhood and Fisherman’s Terminal to the Ship Canal, Ballard Locks, and Discovery Park – before curling around Elliott Bay to embrace the city’s Magnolia and Queen Anne neighborhoods, the Space Needle, and Pike Place Market. 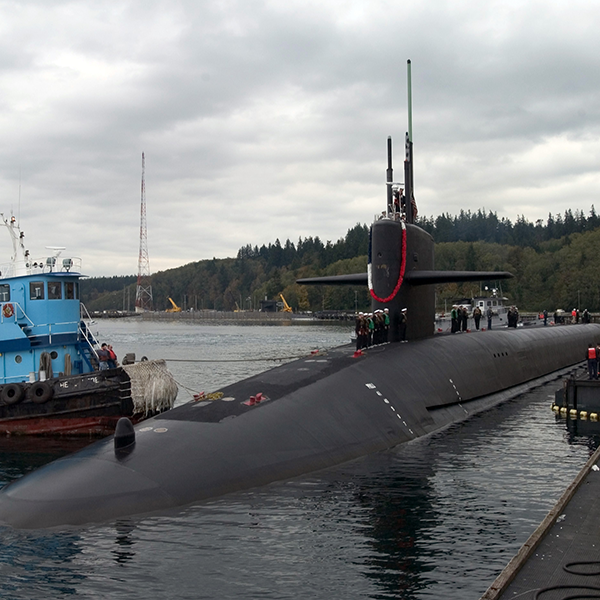 Directly west of the 36th legislative district, on the Kitsap Peninsula – a mere 14 miles from the tip of Discovery Park as the eagle flies – the US Navy’s Bangor Trident Submarine Base hosts the world’s largest and most powerful collection of submarine-launched nuclear-tipped missiles, enough firepower to destroy life on earth many times over. Gael Tarleton’s job and mission – as both a Washington state legislator and as a Ploughshares Fund board member – is to acknowledge and reconcile these two contradictory, and in some respects self-canceling, realities of her Pacific Northwest home. Gael’s job is to map these two worlds so they fully align, so we can clearly witness their coexistence and their contradictions.

In person, Gael possesses a quality Democrats scrambling for the party’s 2020 presidential nomination would do well to bottle: “affable electability.” Her firm handshake, warm smile, easy conversation, and thoughtful, active mind are all an invitation to support her decades-long commitment to a noble vocation: a life of purpose devoted to public affairs and to public service.

A baby boomer, born on New Year’s Day in 1959, Gael is the the 6th of 7 offspring of Irish-American parents, raised in the fishing village of Manchester-by-the-Sea (made famous in the film starring Casey Affleck). After graduating first in her high school class, she enrolled in Georgetown University, where she studied Russian language and history and Soviet politics at the apex of the Cold War between the United States and the Soviet Union.

This moment in time, 1981, is where things get strange. In the decade that followed, the axis of the world shifted so dramatically that those coming of age in the 30 years since that decade – in other words, anyone under 40 years old – can barely comprehend the zero-sum, material topographies of risk and threat associated with Communism, Cold War hostilities, superpower competition, and the prospect of nuclear meltdown or nuclear war.

Nuclear weapons and the risks of a nuclear Armageddon continue to play a central role in the structure of global conflicts in the first decades of the 21st century, and are reemerging as themes in popular culture. The shadow of the 1986 Chernobyl nuclear power plant explosion in the Ukraine currently inflects acclaimed and popular drama series set in the 1980s, including Stranger Things, the German series Dark, and of course the HBO series Chernobyl. For this reason, the historical perspective, political and technical awareness, and rigorous analytic skills of Ploughshares board members such as Gael, first forged during the Cold War politics of the 1980s, will matter enormously in efforts over the next decade to shape our global destiny.

The Defense Intelligence Agency provides military intelligence to warfighters, defense policymakers, and force planners in the US Department of Defense and the intelligence community. “You're going to be a Soviet naval strategic nuclear command control and communications analyst,” the head of the Soviet Navy shop at the DIA told Gael Tarleton in 1981, when she was 22 years old.

To anyone growing up in the United States in the 1960s and 1970s, the Cold War was the vast boundaryless Sargasso Sea in which the entire world swam. The logic of conflict and coexistence for both the US and the Soviet Union had locked the two superpowers in a death-grip that brooked no alternative reality. Weirdly, the nuclear arms race between these two nations, with its strategic doctrine of Mutual Assured Destruction (MAD), cemented this logic. The existence of these weapons created the threat-nexus for conflict; the reality that these weapons could never be used heightened the commitment to coexistence.

Here’s Gael reflecting back on that time from her work in the Defense Intelligence Agency. “Inside the intelligence community, no one expected that there could ever be anything but a constant superpower race to the finish line, whatever that finish line was going to be. By 1980, we already had more than 30,000 nuclear warheads.”

Ronald Reagan’s first presidential term – in the context of the Iran hostage crisis, the Soviet invasion of Afghanistan, and the Soviet destruction of Korean Airlines flight 007 – elevated national anxiety about risks of war between the two superpowers and their security pact allies. Conflict suddenly seemed vastly more likely than coexistence. By 1983, Reagan had launched his “Star Wars” Strategic Defense Initiative and the US and the Soviets had begun to develop and deploy intermediate range missiles designed to carry low-yield nuclear weapons. The 1983 “Petrov Incident,” in which a computer software malfunction brought the two superpowers within a hair’s breadth of mutual annihilation. As Gael said, "1983 was a very scary time.”

Indeed, it was. Journalist Jonathan Schell published The Fate of the Earth in 1982, introducing the world to the idea of the Nuclear Winter. In 1983, the US held its collective breath to watch The Day After, a dramatization about the aftermath of nuclear war in Lawrence, Kansas watched by more than 100 million Americans that until 2009 remained the highest-rated television film in US history.

A World Flipped Inside-Out and Upside-Down

Regime instability in the Soviet Union in this period certainly contributed to anxious relations between superpowers. Between 1982 to 1985, the Soviet leadership changed hands three times, with Stalin-era Politburo stalwarts Leonid Brezhnev, Yuri Andropov, and Konstantin Chernenko all dying within a span of 28 months. In March 1985, a much younger man, Mikhail Gorbachev, succeeded Chernenko as the General Secretary of the Soviet Communist Party. As Gael describes the next four years, the world “flipped inside-out and upside-down.”

“No one was prepared for it, especially the senior intelligence officers responsible for dealing with the Soviet strategic nuclear threat. Reagan and Gorbachev were talking about entering nuclear arms control reduction talks, for the first time ever, to eliminate classes of nuclear weapons, not just limit their size or limit their growth rate. And it was this realization that the nuclear story was part of a major turning point in global relationships, in superpower relationships, and certainly in security relationships.” 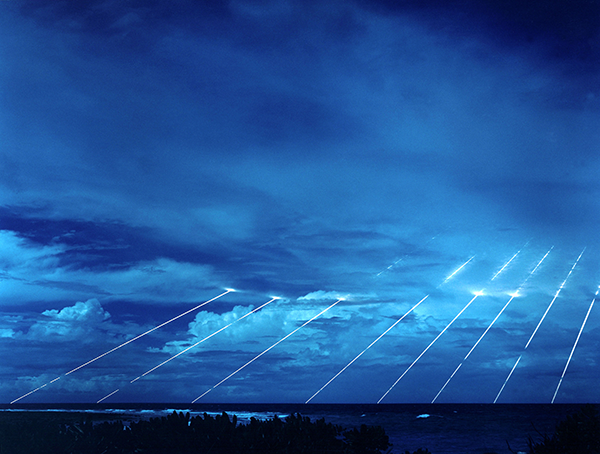 Time exposure shot of testing of the "Peacekeeper" MX re-entry vehicles at the Kwajalein Atoll, all eight fired from one missile.

Shortly thereafter, the NATO alliance realized that something fundamentally new was happening in the Soviet Union. Gorbachev withdrew from the Warsaw Pact and let the European East European countries go their own way and did not offer the defense umbrella any longer. “That was when everything truly changed,” Gael remembers. “And by 1989, the Berlin Wall was coming down.”

Back to the Future

In 1991, Gael Tarleton had moved to Seattle and still only in her 30s. She participated in private sector efforts to assist the US government with cooperative threat reduction programs focused on loose nukes, nuclear materials storage, and nuclear reactor safety.

In 2001, the events of 9/11 crystallized new perspectives on geopolitical realities for younger generations of Americans who had not grown up with the Cold War and bipolar great power competition as their lens for understanding geopolitical conflict. In the 1990s, the success of nuclear arms reduction agreements and verification regimes shifted awareness of the global “risk-threat matrix” toward the political challenges of religious, ethnic, and tribal conflict and the military conundrums of asymmetric “hot” warfare with non-nation-state actors such as the Taliban and Al Qaeda.

In the past decade, the rise of the politically authoritarian nationalism we associate in the United States with Donald Trump has prevailed in many other nations of the world, and in recent years the United States, China, and Russia have all launched extremely ambitious, trillion-dollar nuclear weapons and missile delivery modernization programs that are central components of the ambitions of each nation to project power and influence in these emerging great power contests at the edges of our world.

In 1984, the Bulletin of Atomic Scientists, (a Ploughshares Fund grantee) set the Doomsday Clock at 3 minutes to midnight, the most dangerous Nuclear Armageddon threat level assigned by the Bulletin since 1953. In 1991, in response to the collapse of the Soviet Union, the end of the Cold War, and the arms control agreements reached by Ronald Reagan and George H.W. Bush with their Soviet counterparts, the Bulletin was comfortable resetting the Doomsday Clock at 17 minutes to midnight. The world breathed a sigh of relief. Today we live in a world the Bulletin believes is once again more at risk of nuclear disaster than at any time since 1954. The Doomsday Clock is currently set at 2 minutes to midnight, reflecting at least in part “a pernicious and dangerous departure from the time when the United States sought a leadership role in designing and supporting global agreements that advanced a safer and healthier planet.” 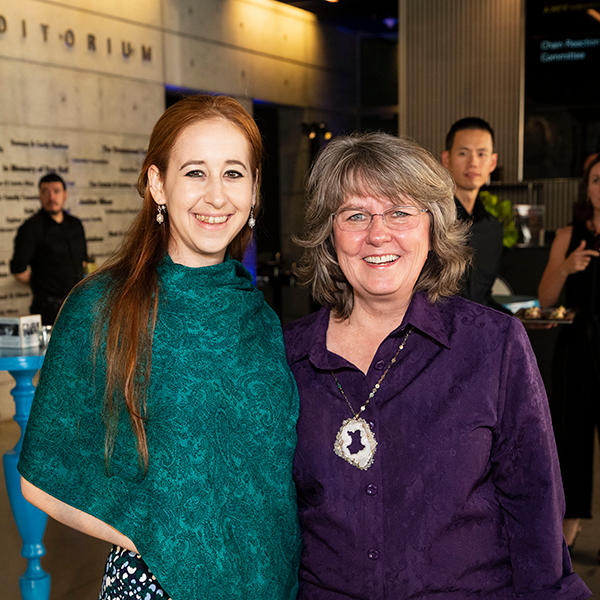 Gael Tarleton, and many others like her who serve on the Ploughshares Board, was made for this moment. Gael remembers telling Ploughshares President Joe Cirincione why she had decided to join the Board. “We need every capacity available in the United States to study and focus on the nuclear weapons threat, because there's going to be a moment when someone in power is going to need folks who actually can analyze and interpret what the heck is happening in that regime or with the nuclear program. So being on the Ploughshares Board has allowed me to focus on what it takes to help prepare US decision makers at any level of government with knowledge and information required to make good decisions under extremely difficult circumstances. Because when the crisis hits, you're not going to have time. It's everything you do before the emergency matters. At Ploughshares, our entire mission is to understand what is going on and to influence people who are making decisions so that they will they will not make a decision that has a radically miscalculated impact or consequence. And that is a hard group of people to pull together.”

Peter Schwartz is a writer, based in Seattle.

Ploughshares Fund
August 19, 2019
Posted in: Board of Directors, The New Arms Race