ICG looks back at their first grant from Ploughshares Fund

International Crisis Group (ICG) is an independent, non-profit, non-governmental organization committed to preventing and resolving deadly conflict. Founded in 1995 by a group of prominent statesmen who despaired at the international community’s failure to anticipate and respond effectively to the tragedies of Somalia, Rwanda and Bosnia, ICG combines expert field research, analysis and engagement with policymakers across the world to prevent wars and shape policies that will build a more peaceful world. ICG recently spoke with us on the initial reaction to their first grant from Ploughshares Fund, what has been accomplished since their founding, and what you can do to continue supporting their work. 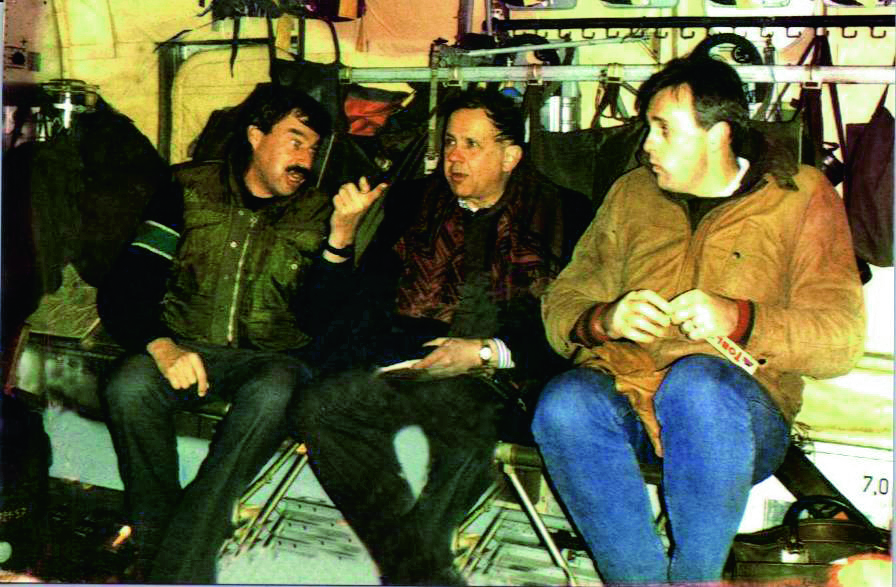 Left to right: Lionel Rosenblatt, then head of Refugees International, Mort Abramowitz and Mark Malloch Brown, at Sarajevo airport moments before coming up with the concept of Crisis Group, January 1993. Photo by CRISISGROUP.

What was your reaction when you found out that you received a grant?

In 1996 to 1997, Albania was a key country for our advocacy following the Balkan wars and crises that followed the break-up of Yugoslavia. Crisis Group needed to expand its work in the country and develop new programs in the region. This grant made it possible and the team felt supported in its efforts. This early funding proved to be crucial to Crisis Group’s current success. Gareth Evans, our President & CEO from 2000 to 2009, used to point to 1997 as the starting point of "extraordinary efforts" that led to our fastest period of growth, six years that took us from just two people in a London office to a staff of 90 people in five global regions and four major capitals. Since then, the Ploughshares Fund has continued to support our institutional efforts including restricted support for our research and advocacy in Pakistan, Afghanistan, and Iran.

What are you most proud of accomplishing in this field?

In 1995, the international system’s lack of response to Bosnia led our founders to establish Crisis Group as an early warning organisation. Crisis Group’s first mandate was to press and advocate for immediate action to avoid any repetition of the events in Bosnia in the wider Balkans. A year after our start, we established the Bosnia program, in which we deployed a team of experts to Bosnia. Our initial report, calling for Bosnia’s elections to be postponed, since the minimum conditions for effective elections did not exist, sent ripples through the international community, earning Crisis Group its first major public attention. In 1997, thanks in part to our first Ploughshares Fund grant, we expanded our operations into Kosovo, Macedonia, and Albania, thus allowing us to fulfill our mission. In March 1998, Crisis Group sounded the alarm weeks before ethnic violence exploded in Kosovo with a book-length survey, Kosovo Spring. The report quickly became the most widely read Crisis Group publication produced up to that point. The Economist noted, “It takes the International Crisis Group to raise such troublesome issues because the other foreign groups that brave the world’s trouble spots are generally biased toward discretion.” Since our founding, we have built on our foundational work in Bosnia and Albania to engage with local actors and policymakers and advocate for conflict resolution and peace around the world. Every day, we continue to do this work and are proud of the impact we have been able to make thus far.

What are you working on today?

Crisis Group now covers 55 conflicts around the world. Our most recent work supported by the Ploughshares Fund has been focused on reducing the tensions between the US, the Gulf countries and Iran. Specifically, in late 2017, we launched an online Trigger List of all potential conflict points and actions that could quickly escalate into a broader confrontation between Tehran and Washington and/or their regional allies. The conflict points and actions covered by the Trigger List include Iranian, US, or Gulf countries’ actions in Syria, Yemen, Iraq, Lebanon, and Afghanistan; Iranian ballistic missile tests; JCPOA (non-)implementation; US sanctions and “terrorism” designations; naval encounters in the Persian Gulf; Iranian arrests of foreigners and dual-nationals; as well as domestic developments in the US, Iran and other concerned countries that could have an impact on regional conditions.

The Trigger List is a unique resource for researchers, policymakers and journalists, and over time has become one of the top 10 sets of pages read on our website. This tool raises stakeholder awareness of potential conflict points and advocates specific responses by governments and non-governmental organisations through the Iran Trigger List platform and targeted advocacy activities.

What drives you to do this work?

When former US Ambassador to Turkey and Thailand Morton Abramowitz and former UN Deputy Secretary-General Mark Malloch-Brown founded Crisis Group in 1995, they had a vision to build support for good governance and inclusive politics, to engage directly with a range of conflict actors and to encourage intelligent action for peace. After witnessing the international community’s failure to anticipate and respond effectively to the tragedies of Somalia, Rwanda, and Bosnia, our founders created a new organisation to serve as the world’s eyes and ears for impending conflicts. The total number of people displaced by war is the highest it has ever been. In 2018 alone, violence forced almost 75 million people to flee their homes, and the following year, war caused economic losses exceeding $500 billion. Conflict prevention and resolution are increasingly complex. The protagonists are no longer exclusively state entities. Influential actors operate in a growing number of regional and sub-regional political institutions. This dangerous increase in complex conflicts drives us to do this work. With diplomats and policymakers noting how our reports and briefings helped shape their approach to conflict, we must continue to deliver our recommendations as a way to contribute to conflict prevention, mitigation, and resolution.

How can people help you realize your goals?

The philanthropic response to rising violence and conflict has been modest, with less than 1 percent of donors giving to peace and security causes, in keeping with historical trends. Many philanthropists are disheartened by problems related to global conflict, reasoning that they are too large to be tackled at the individual level. Many, in short, feel powerless to aid the cause of peace. Yet philanthropy can have a big impact in preventing, mitigating and ending armed conflict. Charity by itself may not bring peace, but without it, many peace efforts could not succeed. With financial support from individuals, foundations, corporations and governments, we can continue to serve in our role as political “first responders” to an unstable international order. Outside support strengthens and heightens our work as we confront a dramatic rise in the number of conflicts, increasingly involving unaccountable state actors as well as non-state actors, more civilians killed, and more people displaced worldwide. We have recognised these dangerous trends, and with financial support, have deepened existing work, and created new initiatives to address them. Our Future of Conflict program examines how climate change, social media, and the global economy worsen deadly conflicts. Our Gender project provides policymakers with rigorous, realistic and field-based views of how to take varying gender realities into account in pursuing conflict prevention strategies--and why this is crucial to the success of those strategies. We will continue to adapt our organization to the needs and priorities of evolving conflicts, and we look forward to continued collaboration with the Ploughshares Fund to prevent war and shape peace.

Ploughshares Fund is proud to have supported individuals and organizations working for over 40 years to reduce and eliminate nuclear weapons. Since being founded in 1981, our network of grantees and partners have been behind critical milestones in the history of arms control and threat reduction. My First Grant aims to celebrate our historical impact while also highlighting the pathways forward in the peace and security field being made by our current grantees. Follow these stories – past and present – at ploughshares.org or by tracking #MyFirstPFGrant and #PF40th.

Photo: Still image from Crisis Group: On the Frontlines.