On October 24, 2020 (UN Day), the Treaty on the Prohibition of Nuclear Weapons, also known as the Ban Treaty, received its 50th ratification from Honduras triggering its formal entry into force. The treaty will become effective on  January 22, 2021 — two days after Inauguration Day in the United States. For the first time in history, nuclear weapons will be illegal under international law.

This milestone, and the extraordinary civil society work leading to it, is an achievement with profound impact on global efforts to eliminate nuclear weapons. Against difficult odds and great skepticism, the members of the International Campaign to Abolish Nuclear Weapons (ICAN) succeeded in bringing an international ban on nuclear weapons into force. With grit and imagination, this alliance of small non-government groups first convinced over one hundred nations to sign the humanitarian pledge against nuclear weapons. Then, ICAN convinced 122 nations to adopt a treaty banning nuclear weapons, filling a glaring gap in international laws prohibiting weapons of mass destruction. And finally, over the course of three years, ICAN and its network of global campaigners worked tirelessly to gather signatures and ratifications from states parties, ensuring the treaty would enter into force. Now ICAN will promote adherence to and implementation of the Ban Treaty.

In 2017, ICAN received the Nobel Peace Prize in honor of these efforts. According to the Nobel Committee, ICAN received the award "for its work to draw attention to the catastrophic humanitarian consequences of any use of nuclear weapons and for its ground-breaking efforts to achieve a treaty-based prohibition of such weapons." To date, the treaty has 84 signatories in addition to the 50 ratifications. 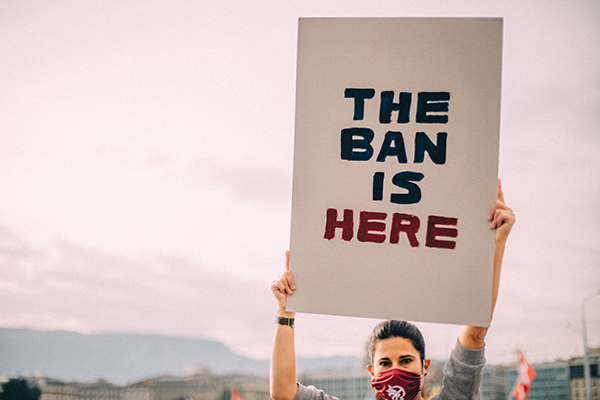 On October 24, 2020, the UN Treaty on the Prohibition of Nuclear Weapons reached the required 50 states parties for its entry into force, after Honduras ratified just one day after Jamaica and Nauru submitted their ratifications. In 90 days, the treaty will enter into force, cementing a categorical ban on nuclear weapons, 75 years after their first use.

Ploughshares Fund first supported ICAN in 2016. We are proud that four Ploughshares Fund grantees have gone on to win the prestigious Nobel Peace Prize: International Physicians for the Prevention of Nuclear War (IPPNW), Pugwash Conferences on Science and World Affairs, Jody Williams (supporting her efforts to establish what would become the International Campaign to Ban Landmines (ICBL), and ICAN. ICBL and their work to bring about the Mine Ban Treaty served as an inspiration for ICAN, and we expect their success will too go on to inspire future efforts to make the world safer. Ploughshares Fund is committed to supporting individuals and organizations like these whose innovative approaches help address international security challenges.

The risk of nuclear war is at its highest level since the early 1980s. All nine nuclear-armed states are building more and newer nuclear weapons — and impulsive, unpredictable leaders are elevating their role in military policy. It is our hope that the Ban Treaty’s entry into force will heighten public awareness of the risks from nuclear weapons, propel public support for legal, collective, peaceful solutions, and send a powerful message to all that it is past time for the complete and total elimination of nuclear weapons.

We are pleased to see the Ban Treaty enter into force. We warmly congratulate ICAN and every global activist who has worked tirelessly to realize a world where these dangerous weapons are not only deemed immoral but now, officially, illegal.

Social media photo: On October 24, 2020, the UN Treaty on the Prohibition of Nuclear Weapons reached the required 50 states parties for its entry into force. ICAN / Aude Catimel