Ahead of Her Time

In honor of National Women’s History Month, we pay respect to the life of a woman who made history by founding Ploughshares Fund.

Like many Americans, Sally Lilienthal was concerned that a thermonuclear war between the United States and the Soviet Union could erupt at anytime. And rightly so: it was 1981, the height of the Cold War, and each country had amassed arsenals with the destructive power to extinguish all life on the planet.

But Sally was not like most Americans, or most people, for that matter.

Instead of getting ready for a quiet life of retirement, the 62-year-old sculptor, human rights activist and mother decided to take on nuclear weapons.

“I thought that if a lot of people felt the same way I did but didn’t know what to do about it, we might get together and search for new ways together to get rid of nuclear weapons that were threatening us all,” she later told the San Francisco Chronicle.

With a little help from her friends and a lot of grit and determination, Sally founded Ploughshares Fund in her San Francisco living room in 1981, the same year IBM announced its first Personal Computer.

Sally was ahead of her time in many ways. After college, she moved to Washington, DC during World War II to work in the Office of War Information when few women held office jobs. Later, she co-founded the California chapter of the NAACP Legal Defense and Education Fund, served on the regional ACLU board and was national vice chairwoman of Amnesty International.

In that first year, Ploughshares Fund managed to give away just $100,000 in grants to address the unprecedented risk nuclear weapons posed to humanity. By the time Sally passed away in 2006, her 1981 startup had blossomed into the largest grantmaking foundation in the United States dedicated exclusively to peace and security. True to character, she continued to run Ploughshares Fund until her last days, which came when she was nearly 87 years old. 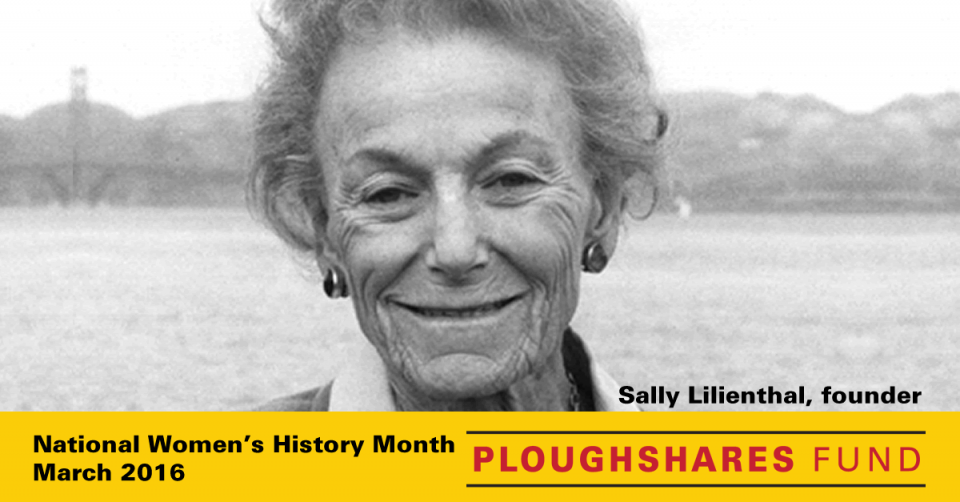 Honoring Sally Lilienthal on Her Birthday

Looking to the Future of Nonproliferation