Stops a Bomb, Stops a War

In the 2016 State of the Union address President Barack Obama said, "As we speak, Iran has rolled back its nuclear program, shipped out its uranium stockpile, and the world has avoided another war." This triumph for nuclear security is a direct result of the JCPOA – the Joint Comprehensive Plan of Action – better known as the Iran Deal, agreed to last summer by Iran, the US and five other world powers.

As of the time of writing, January 14, 2016, according to Secretary of State John Kerry, “Implementation Day” of the Iran nuclear agreement is only days away. The terms of the deal make clear that implementation ("Implementation Day") will only happen once the International Atomic Energy Agency certifies that Iran has completed all the necessary steps it must take for the agreement to take effect. Only then will the US remove sanctions tied to its nuclear program. So far Iran has: 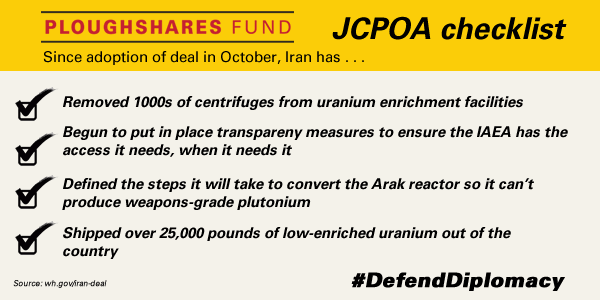 Ploughshares Fund wired together a diverse and dynamic civil society network that played a pivotal role at the critical margins of the deal’s success. We convened and connected more than 200 organizations and 85 individuals that helped make the deal’s case before the American public. The network included organizations such as the American Security Project, Americans United For Change, Arms Control Association, The Aspen Institute, Atlantic Council, The Brookings Institution, Center for American Progress, Center for a New American Security, Friends Committee on National Legislation, J Street, MoveOn, the National Iranian American Council, Win Without War, and Vet Voice Foundation, just to name a few.

But the deal remains vulnerable and requires continued focus – and protection. As Ploughshares President Joe Cirincione put it back in September, when the agreement barely survived a tough congressional review: "We will have to be every bit as resolute and as vigilant as the opponents of this peaceful agreement, who have promised to 'use every tool' at their disposal to derail it."

This concern already has become a reality. Congress is now considering a measure seeking to apply new sanctions on Iran that could effectively kill the deal.

What can you do to support diplomacy over the possibilities of nuclear proliferation and war?

» Stay informed by signing up for our newsletter.

Let's see this deal through with the vigilance that it will take to make the world safer from the unparalleled threat that nuclear weapons present.