The Gold Standard of Nuclear Spending 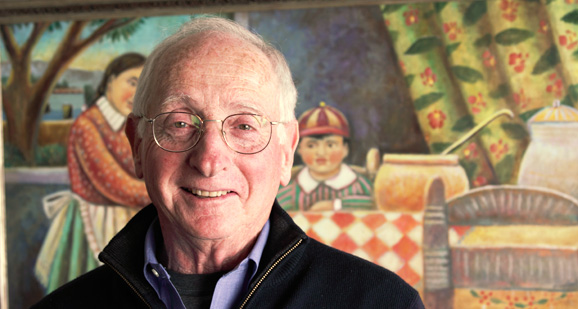 When we published our infographic demonstrating that planned replacements for the B-61 bombs would be worth more than the bomb’s actual weight in gold, we were reminded that the argument had been used before – by one of our most stalwart supporters.

From the B-2 bombers of the 1980’s to the B61 bombs being rebuilt today, two generations have effectively argued against wasteful and unnecessary spending. But it’s not just about the money. “In the end, nuclear war is a game you cannot win. So, why would you spend this much money on planes and weapons you can’t and won’t ever use?” says Mike Parker, Ploughshares Fund supporter and former board member.

In 1988, the US Department of Defense was calling for the procurement of 132 B-2 stealth bombers that it hoped would fly undetected over the then-Soviet Union, each armed with up to 8 short-range nuclear missiles and 16 air-dropped nuclear bombs. Mike Parker had returned at age 53 to graduate school for an MPA at Harvard’s John F. Kennedy School of Government. As part of an arms control seminar at the Massachusetts Institute of Technology, he wrote a paper entitled “B-2 Bomber—Big Ticket, Bad Idea.”

The ballooning cost of the bombers had already been characterized by John Pike of the Union of Concerned Scientists (a Ploughshares Fund grantee) that “at that price, the plane is almost literally worth its weight in gold.” In his paper, Parker explored the strategic argument of wasteful nuclear spending in greater detail.

By 1988, the B-2 was already being built, even though it had never flown, nor had the program been fully approved by Congress. Parker showed that, even under the questionable logic of Cold War thinking, the Soviets could easily defeat the B-2’s mission of finding and destroying rail and road mobile missiles, simply by multiplying their number at a much lower cost than the U.S. would spend building the B-2. Nor, if the B-2 was used to target hardened Soviet command and control bunkers, did it fit with any theory of controlling nuclear conflict.

Beyond the point that these objectives could be accomplished for much less money by other existing weapons and the emerging submarine nuclear forces, Parker’s main point was that,

“It is one of the anomalies of nuclear deterrence that the parties are hostage to each others’ perceptions of vulnerability…Holding mobile missiles at risk will not increase crisis stability… (T)he more threatened USSR mobile missiles really are, the more likely they are to be used early in a crisis…(T)he B-2 bomber…is counterproductive and inconsistent with our arms control efforts to achieve stable deterrence in the START talks.”

At the same time in Washington, DC, a young Joe Cirincione was working on the professional staff of the House Armed Services Committee supporting members also questioning the purchase of the B-2s. As Cold War tensions were easing, he was lobbied by an even-younger Naila Bolus, then with WAND, and other arms control advocates supported by Ploughshares Fund, to convince Congress to stop wasting money on weapons we did not need, for a war we would never fight. “I remember talking with Rep. Ron Dellums after he emerged from his first ever briefing on the B-2,” says Joe, “He was outraged that we had already spent $20 billion on a plane that most members of Congress didn’t even know existed.”

Over the next several years, backed by various arguments about over spending and counterproductive purpose, they wrestled the B-2 bomber program to a compromise closure: the Air Force was allowed to buy the 21 bombers already in production, but not the full 132. It proved a wise decision. Its vaunted “stealth” capabilities proved much less than advertised, more expensive to operate than predicted, and unnecessary for any of the operations conducted.

Flash forward to 2013. The defense department now wants to spend $11.6 billion to rebuild the B61 nuclear bombs deployed in Europe—bombs that will never be used, designed for a threat that no longer exists. There are about 400 of these outmoded bombs still in the arsenal, with about half stationed at bases in Europe. At this price, the bombs will cost more than their weight in gold, nearly two times more in fact, an estimated $28.9 million each.

Ploughshares Fund and our coalition of grantees are organizing to cut this wasteful program and save billions of dollars in taxpayer money—using the same gold standard, out-of-control spending argument that proved so effective in the fight over the B-2 bomber.

The public and media are starting to take notice. Recently both The New York Times and the Los Angeles Times called out the B61 program. According an editorial in The New York Times, “[The $10 billion in projected spending] is a nonsensical decision, not the least because it is at odds with Mr. Obama’s own vision.”

When Mike Parker presented his initial paper to the MIT seminar in the spring of 1989 one of the MIT professors suggested that he share his paper with William Perry, who at the time was in favor of the B-2 bomber. When he became Secretary of Defense in 1993, Perry had begun to change his position and supported the compromise plan to limit the number of stealth bombers. In 2007, Secretary Perry joined Secretary George Shultz, Senator Sam Nunn, and Secretary Henry Kissinger in a much-heralded public plea for a global effort to “reduce reliance on nuclear weapons, prevent their spread, and ultimately end them as a threat to the world.” The four statesmen continue their efforts today.

“I told him it had been a long time coming, but felt I could now give it to him. You would have to ask Bill Perry what he thinks now, but his advocacy for Global Zero makes me think we could agree that the crazy ‘logic’ of nuclear deterrence still deludes us into imagining that the nuclear game can ever be played to a successful conclusion. In the longer run, there can be no winner.”

It is important to remember these debates, how long they took, and how prescient the proponents of restraint proved to be. As Joe Cirincione commented, “Today, we are on track to spend over $640 billion on obsolete nuclear weapons and related programs over the next ten years alone. Procurement is racing ahead of policy. But Mike is still in the fight and so are we. We are steadily winning the battles. It may take a while, but I never doubt that one day we will put an end to this solid-gold madness, once and for all.”