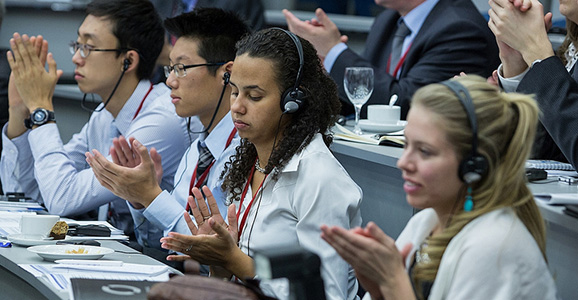 I first learned about the inaugural Hale Fellowship from a former member of the Ploughshares Fund team who raved about her tenure on staff. I served as a presidential appointee at the Department of Energy during the debate on ratification of the New START Treaty in 2010. That debate introduced me to Ploughshares Fund’s mission and the vital role that members of the peace and security community play in shaping US foreign policy.

Nuclear policy is one of the few things that impacts all 195 countries in the world. The consequences stemming from the theft of nuclear material or an underground nuclear test are not limited to national borders. Ploughshares Fund plays a vital role in raising awareness of the inherent risks of these “deadly arsenals” (plagiarizing Joe Cirincione’s coauthored book by the same title). Boasting near universal participation, the Nuclear Nonproliferation Treaty (NPT) serves as the cornerstone of international efforts to reduce the dangers posed by nuclear weapons. The NPT’s fundamental objective is to stop new states from entering the nuclear-armed fraternity. Additionally, the treaty facilitates the peaceful use of nuclear technology by non-weapons states and calls for nuclear armed nations to work toward disarmament. The NPT is largely a success but the future effectiveness of the treaty hinges upon US leadership.

The ratification of New START is one sign that US leadership on arms control remains strong. But there is more work ahead. Expanding the scope of arms reductions to additional nuclear weapon states requires bolder action by the United States in the coming decade. My academic studies centered on pragmatic steps the United States can take to reduce deployed nuclear weapons below the limits set by New START and identifying non-military options that can bring Iran into compliance with their nonproliferation obligations and North Korea back into the fold.

I look forward to the opportunity to work with the Ploughshares Fund’s incredible grantees. Together, we will work to reduce the role of nuclear weapons and address the root causes of conflict that lead some states pursue nuclear weapons in the first place.

The nuclear arms race of the Cold War has come to a close. Arsenals of the United States and Russia have decreased considerably but remain vastly oversized. Generation Y has the unenviable task of shaping a future where the possibility of a nuclear war is no longer on the table, be it through in terrorist use, misguided policy or miscalculation. As forthcoming leaders, our generation can create a future where the most destructive force ever created by man no longer threatens to erase everything we know. Ploughshares Fund is committed to that end. I’m excited to engage our country’s future leaders in a dialogue of such great importance to every person who inhabits our planet. I owe this opportunity to Ploughshares Fund supporters. In giving generously to the Ploughshares Fund, these supporters are taking tangible steps towards the bipartisan, decades old vision of a world free from nuclear weapons.

Remembering Sally Lilienthal on her birthday

Ploughshares Fund celebrates nomination of Amb. Bonnie Jenkins to US Department of State